The WINDENERGIE, s.r.o. is an engineering and operation company in the renewable energy industry.

As a full-service company, we fully develop our projects from the land acquisition, design, construction and distribution, to the management.

To the main business of the Company WIND ENERGY, sro is the designing, construction and operation of wind farm parks in the Czech Republic. Each member of the group of companies by engineer Karl Schlecht, part of which the Company WIND ENERGY, Ltd., is committed with the available financial resources responsibly and economically deal with it. For this reason, every employee of a konsenquentes economies with the financial resources entrusted required. 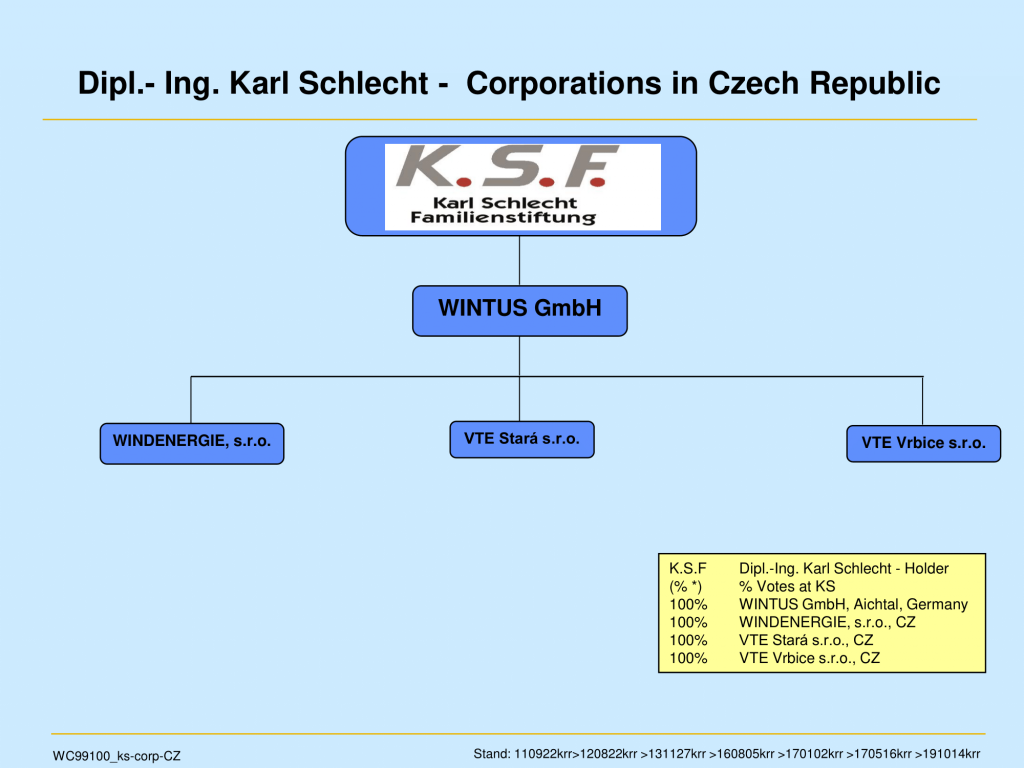 Currently the only shareholder of WINDENERGIE, s.r.o. is the company WINTUS GmbH, which is also the owner of the companies VTE Stará s.r.o. and VTE Vrbice s.r.o. The owner of all of these companies is Mr. Dipl.-Ing. Karl Schlecht, honorary senator of the University in Hohenheim and honorary professor of the Tongji University in Shanghai, see.

In 2008 she became the sole shareholder Windenergie Ltd. Wintus GmbH company, which also belongs to a group of companies Mr. Dipl.-Ing. Charles schlecht. Windenergie, Ltd. has, by virtue of the parent company Wintus GmbH, which currently operates wind turbines with a total capacity of 17 MW and rich experience. Subsidiary Wintus GmbH is closely associated with the Foundation ” Wind Energy Department at the University of Stuttgart, under the auspices of its owner, Dipl.-Ing. Karl Schlecht.

In May 2014 Dipl. Ing. Karel Schlecht was dismissed from the position of company executive. As of the same date, the new Managing Directors, Ing. Martin Alexander Schlecht and Mr. Rudolf Kreisinger were appointed.